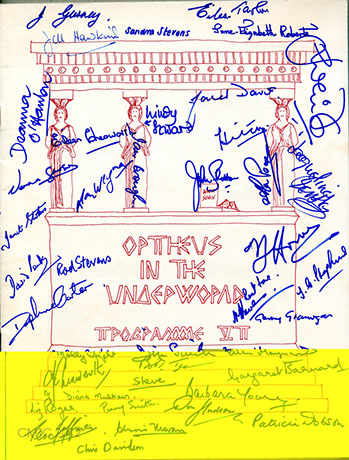 Orpheus in the Underworld

The first London production of the work was at Her Majesty's Theatre in December 1865, in an English version by J. R. Planché titled Orpheus in the Haymarket.
There were West End productions in the original French in 1869 and 1870 by companies headed by Hortense Schneider. English versions followed by Alfred Thompson (1876) and Henry S. Leigh (1877).
An adaptation by Herbert Beerbohm Tree and Alfred Noyes opened at His Majesty's in 1911. The opera was not seen again in London until 1960, when a new adaptation by Geoffrey Dunn opened at Sadler's Wells Theatre; this production by Wendy Toye was frequently revived between 1960 and 1974. An English version by Snoo Wilson for English National Opera (ENO), mounted at the London Coliseum in 1985, was revived there in 1987. A co-production by Opera North and the D'Oyly Carte Opera Company in a version by Jeremy Sams opened in 1992 and was revived several times. In 2019 ENO presented a new production directed by Emma Rice, which opened to unfavourable reviews.