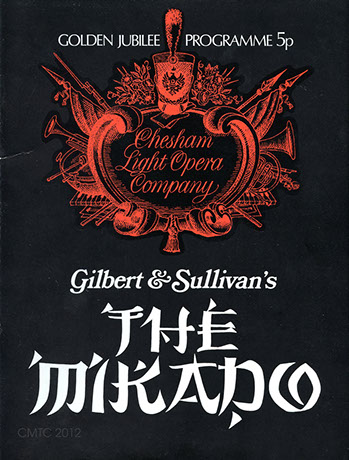 Gentlemen of the fictitious Japanese town of Titipu are gathered ("If you want to know who we are"). A handsome but poor minstrel, Nanki-Poo, arrives and introduces himself ("A wand'ring minstrel I"). He inquires about his beloved, a schoolgirl called Yum-Yum, who is a ward of Ko-Ko (formerly a cheap tailor). One of the gentlemen, Pish-Tush, explains that when the Mikado decreed that flirting was a capital crime, the Titipu authorities frustrated the decree by appointing Ko-Ko, a prisoner condemned to death for flirting, to the post of Lord High Executioner ("Our great Mikado, virtuous man"). As Ko-Ko was the next prisoner scheduled to be decapitated, the town authorities reasoned that he could "not cut off another's head until he cut his own off", and since Ko-Ko was not likely to try to execute himself, no executions could take place. However, all of the town's officials except the haughty nobleman, Pooh-Bah, proved too proud to serve under an ex-tailor, and they resigned. Pooh-Bah now holds all their posts and collects all their salaries. Pooh-Bah informs Nanki-Poo that Yum-Yum is scheduled to marry Ko-Ko on the very day that he has returned ("Young man, despair").

Ko-Ko enters ("Behold the Lord High Executioner") and asserts himself by reading off a list of people "who would not be missed" if they were executed ("As some day it may happen"), such as people "who eat peppermint and puff it in your face". Yum-Yum appears with Ko-Ko's other two wards, Peep-Bo and Pitti-Sing ("Comes a train of little ladies", "Three little maids from school"). Pooh-Bah does not think that the girls have shown him enough respect ("So please you, sir"). Nanki-Poo arrives and informs Ko-Ko of his love for Yum-Yum. Ko-Ko sends him away, but Nanki-Poo manages to meet with his beloved and reveals his secret to Yum-Yum: he is the son and heir of the Mikado, but travels in disguise to avoid the amorous advances of Katisha, an elderly lady of his father's court. They lament that the law forbids them to flirt ("Were you not to Ko-Ko plighted").

Ko-Ko and Pooh-Bah receive news that the Mikado has just decreed that unless an execution is carried out in Titipu within a month, the town will be reduced to the rank of a village, which would bring "irretrievable ruin". Pooh-Bah and Pish-Tush point to Ko-Ko himself as the obvious choice for beheading, since he was already under sentence of death ("I am so proud"). Ko-Ko argues, however, that, firstly, it would be "extremely difficult, not to say dangerous", for someone to attempt their own beheading, and secondly, it would be suicide, which is a capital offence. Fortuitously, Ko-Ko discovers that Nanki-Poo, in despair over losing Yum-Yum, is preparing to commit suicide. After ascertaining that nothing would change Nanki-Poo's mind, Ko-Ko makes a bargain with him: Nanki-Poo may marry Yum-Yum for one month if, at the end of that time, he allows himself to be executed. Ko-Ko would then marry the young widow.

Everyone arrives to celebrate Nanki-Poo and Yum-Yum's union ("With aspect stern and gloomy stride"), but the festivities are interrupted by the arrival of Katisha, who has come to claim Nanki-Poo as her husband. However, the townspeople are sympathetic to the young couple, and Katisha's attempts to reveal Nanki-Poo's secret are drowned out by the shouting of the crowd. Outwitted but not defeated, Katisha makes it clear that she intends to get vengeance.

Yum-Yum is being prepared by her friends for her wedding ("Braid the raven hair"), after which she muses on her own beauty ("The sun whose rays"). Pitti-Sing and Peep-Bo return to remind her of the limited duration of her impending union. Joined by Nanki-Poo and Pish-Tush, they try to keep their spirits up ("Brightly dawns our wedding-day"), but soon Ko-Ko and Pooh-Bah enter to inform them of a twist in the law that states that when a married man is beheaded for flirting, his wife must be buried alive ("Here's a how-de-do"). Yum-Yum is unwilling to marry under these circumstances, and so Nanki-Poo challenges Ko-Ko to behead him on the spot. It turns out, however, that the soft-hearted Ko-Ko has never executed anyone and cannot execute Nanki-Poo. Ko-Ko instead sends Nanki-Poo and Yum-Yum away to be wed (by Pooh-Bah, as Archbishop of Titipu), promising to present to the Mikado a false affidavit in evidence of the fictitious execution.

The Mikado and Katisha arrive in Titipu accompanied by a large procession ("Mi-ya Sa-Ma", "From Every Kind of Man"). The Mikado describes his system of justice ("A more humane Mikado"). Ko-Ko assumes that the ruler has come to see whether an execution has been carried out. Aided by Pitti-Sing and Pooh-Bah, he graphically describes the supposed execution ("The criminal cried") and hands the Mikado the certificate of death, signed and sworn to by Pooh-Bah as coroner. Ko-Ko notes slyly that most of the town's important officers (that is, Pooh-Bah) were present at the ceremony. However, the Mikado has come about an entirely different matter; he is searching for his son. When they hear that the Mikado's son "goes by the name of Nanki-Poo", the three panic, and Ko-Ko says that Nanki-Poo "has gone abroad". Meanwhile, Katisha is reading the death certificate and notes with horror that the person executed was Nanki-Poo. The Mikado, though expressing understanding and sympathy ("See How the Fates"), discusses with Katisha the statutory punishment "for compassing the death of the heir apparent" to the Imperial throne – something lingering, "with boiling oil ... or melted lead". With the three conspirators facing painful execution, Ko-Ko pleads with Nanki-Poo to reveal himself to his father. Nanki-Poo fears that Katisha will demand his execution if she finds he is alive, but he suggests that if Katisha could be persuaded to marry Ko-Ko, then Nanki-Poo could safely "come to life again", as Katisha would have no claim on him ("The flowers that bloom in the spring"). Though Katisha is "something appalling", Ko-Ko has no choice: it is marriage to Katisha, or a painful death for himself, Pitti-Sing and Pooh-Bah.

Ko-Ko finds Katisha mourning her loss ("Alone, and yet alive") and throws himself on her mercy. He begs for her hand in marriage, saying that he has long harboured a passion for her. Katisha initially rebuffs him, but is soon moved by his story of a bird who died of heartbreak ("Tit-willow"). She agrees ("There is beauty in the bellow of the blast") and, once the ceremony is performed (by Pooh-Bah, the Registrar), she begs for the Mikado's mercy for him and his accomplices. Nanki-Poo and Yum-Yum then reappear, sparking Katisha's fury. The Mikado is astonished that Nanki-Poo is alive, as the account of his execution had been given with such "affecting particulars". Ko-Ko explains that when a royal command for an execution is given, the victim is, legally speaking, as good as dead, "and if he is dead, why not say so?"[n 3] The Mikado deems that "Nothing could possibly be more satisfactory", and everyone in Titipu celebrates ("For he's gone and married Yum-Yum").