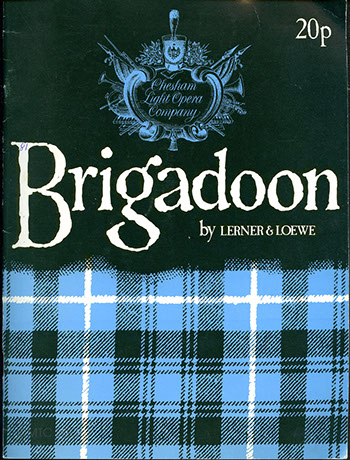 New Yorkers Tommy Albright and Jeff Douglas have travelled to the Scottish Highlands on a game-hunting vacation, but they get lost on their first night out. They begin to hear music ("Brigadoon") coming from a nearby village that does not appear on their map of the area. They head over there to get directions back to their inn and find a fair in progress ("McConnachy Square"), with villagers dressed in traditional Scottish tartan. Andrew MacLaren and his daughters arrive at the fair to purchase supplies for younger daughter Jean's wedding to Charlie Dalrymple. Harry Beaton, son of Archie Beaton, is madly in love with Jean and is depressed at the thought of her marrying another, unable to find comfort in Maggie Anderson's devotion to him. One of the girls asks Jean's older sister Fiona when she'll marry, and Fiona answers she's waiting for the right person ("Waitin' For My Dearie").

Tommy and Jeff wander into the village and ask where they are; Archie informs them that they are in "Brigadoon". Fiona invites the wanderers to have a meal and rest at the MacLaren home. Flirtatious dairymaid Meg Brockie immediately takes a liking to Jeff and leads him off. Charlie Dalrymple appears, rejoicing in his impending nuptials. He shares a drink with Tommy, toasting to a Mr. Forsythe whom he thanks for "postponing the miracle". When Tommy asks what that means, Fiona shushes him and leads him away as Charlie celebrates the end of his bachelorhood ("Go Home with Bonnie Jean"). Tommy tells Fiona that he has a fiancée, Jane, in New York, but he's in no hurry to marry her, and Fiona reveals that she likes Tommy very much. Tommy insists on accompanying Fiona to gather heather for the wedding ("The Heather on the Hill"). Meanwhile, Meg takes Jeff to a place in the forest with a shack and a cot. She tells him she's "highly attracted" to him, but he spurns her advances, wanting only to sleep. She reflects on her 'eventful' love life ("The Love Of My Life").

At the MacLarens', Jean's friends help her pack her things to move into Charlie's home ("Jeannie's Packin' Up"). Charlie arrives to sign the MacLarens' family Bible. He wants to see Jean; told that it's bad luck to see her on the wedding day, he begs for her to come out anyway ("Come to Me, Bend to Me"). Tommy and Fiona return with a basket full of heather, and Fiona goes upstairs to help Jean dress for the wedding. Jeff arrives wearing a pair of Highland trews (trousers); apparently his own pants have been damaged on a "thistle". Jeff finds that Tommy is so happy that he can barely contain it ("Almost Like Being In Love"). Tommy notices that all the events listed in the family Bible, including Jean's wedding, are listed as if they had happened 200 years earlier. When he asks Fiona about this, she sends him to the schoolmaster, Mr. Lundie.

Fiona, Tommy, and Jeff arrive at Mr. Lundie's home, where he relates a story that the two New Yorkers can hardly believe: to protect Brigadoon from being changed by the outside world, 200 years ago the local minister prayed to God to have Brigadoon disappear, only to reappear for one day every 100 years. All citizens of Brigadoon are forbidden to leave the town, or it will disappear forever. Tommy asks hypothetically if an outsider could be permitted to stay. Mr. Lundie replies, "A stranger can stay if he loves someone here – not jus' Brigadoon, mind ye, but someone in Brigadoon – enough to want to give up everythin' an' stay with that one person. Which is how it should be. 'Cause after all, lad, if ye love someone deeply, anythin' is possible."

The group leaves to go to the wedding, which opens with the clans coming in from the hills. Mr. Lundie marries Charlie and Jean, and they perform a traditional celebratory wedding dance. Sword dancers appear, led by Harry, and they perform an elaborate dance over their weapons. All the town joins in the dance, but it abruptly halts when Jean screams as Harry tries to kiss her. In anguish over Jean's wedding, he announces that he's leaving the town (which would end the miracle, causing Brigadoon to disappear forever into the Highland mists) and sprints away.

The men of the town, including Tommy and a reluctant Jeff, frantically try to find Harry before he can depart the town ("The Chase"). Suddenly an agonized scream is heard. Harry, who appears to have fallen on a rock and crushed his skull, is found dead by the other men. Deciding not to tell the rest of the town until the next morning, the men carry Harry's body away. Fiona and her father arrive to see if everything is all right. As Mr. MacLaren leaves, Tommy sees Fiona, and they embrace. She reveals her love for him, and he tells her he believes he feels the same way ("There But For You Go I"). Fiona reminds him that the end of the day is near, and Tommy tells her he wants to stay in Brigadoon with her. They go to find Mr. Lundie.

Meanwhile, in the village, Meg tells about the day her parents were drunkenly married ("My Mother's Wedding Day"), and the townsfolk dance until the sound of Highland pipes pierces the air. The gaiety is interrupted as Archie Beaton enters carrying Harry's body, led by the pipers playing a pìobaireachd. Maggie, who loved Harry, performs a funeral dance for her unrequited love. The men of Brigadoon help Archie carry his son to the burial place.

Tommy finds Jeff and announces his intention to stay. Jeff thinks the idea is absurd and argues with Tommy until he has convinced him that Brigadoon is only a dream. Jeff also reveals that he tripped Harry and accidentally killed him. Fiona and Mr. Lundie arrive, and Tommy, shaken by Jeff's confession, tells Fiona that he loves her, but he can't stay; he still has doubts ("From This Day On"). Fiona tells Tommy, as she fades away into darkness, that she will love him forever.

Four months later, Jeff is drinking heavily at a hotel bar in New York. Tommy, who has been living on a farm in New Hampshire, enters and greets Jeff. Tommy is still in love with Fiona and cannot stop thinking about her. His fiancée Jane Ashton, a beautiful socialite, talks to him about their impending wedding, but everything she says causes him to hear Fiona's voice and dream of Brigadoon ("Come to Me, Bend to Me" (reprise) and "Heather on the Hill" (reprise)). Tommy tells Jane that he cannot marry her, and she argues with him, but he continues to daydream about his true love ("Go Home With Bonnie Jean" (reprise) and "From This Day On" (reprise)). Jane leaves, and Tommy tells Jeff that he wants to return to Scotland, although he knows the village will not be there.

Tommy and Jeff return to the spot where they found Brigadoon and, as they expected, see nothing there. Just as they turn to leave, they hear the music again ("Brigadoon"), and Mr. Lundie appears and says, "My my! You must really love her. You woke me up!" Tommy waves goodbye to Jeff and disappears with Mr. Lundie into the Highland mist to be reunited with Fiona.